HISTORY OF THE COMMANDOS The Commando Regiment was formed in 1940 at the behest of Winston Churchill himself. The humiliating defeat at Dunkirk lead to the realization that Britain was not in a position to launch a large scale military attack against the German army. Instead, Churchill determined that the British forces should have within their ranks a new group of fighting men dedicated to causing maximum disruption to the German army through morale-boosting, well prepared, surprise attacks on enemy installations.

He famously said that, “There ought to be at least 20,000 Storm Troops or ‘Leopards’ drawn from existing units, ready to spring at the throats of any small landings or descents.”

The Commandos had a wide brief when they were first formed and were trained to operate in all theatres of war. They would eventually spearhead the invasions of Europe and Asia and their importance to the allied war effort can never be under estimated.

Their basic equipment was that of any infantryman with the addition of specialist items to enable them to deal with any type of terrain or situation. One of these specialist items was the now world famous Fairbairn-Sykes Commando knife. This would go on to be carried by British and other Allied Commandos on many WWII’s operations, perhaps most famously the Normandy Landings of June 1944.

When WWII had finished most of the Commando units were disbanded but the remaining Royal Marines 3 Commando Brigade has continued to provide the thrust of British military action since. The F-S knife has remained a vital part of commando kit and has been carried by Commandos during the Suez crisis, the Falklands War, the Gulf War and the War in Afghanistan.

HISTORY OF THE FAIRBAIRN-SYKES COMMANDO KNIFE

A historic meeting took place on 4 November 1940 when Wilkinson Sword designed the Commando Knife acting on the advice of William Ewart Fairbairn and Eric Anthony Sykes. Fairbairn and Sykes had become knife specialists working for the Shanghai Riot Police and they had returned to Britain earlier that year to train Commandos.

It is not clear why Wilkinsons were approached rather than one of the many Sheffield knife manufacturers in existence during 1940. It is true that Wilkinsons were already an important supplier to the government, making bayonets and swords, but so too were Sheffield’s knife makers. Furthermore, the great cutlers of Sheffield would have been more than capable of designing and manufacturing the F-S knife. Indeed, it is highly likely that they already made similar patterns. By way of an example, the image from Joseph Rodgers catalogue from the early 1900’s shows a range of double edged daggers and dirks with blades strikingly similar in design to the F-S knife.

On 14 November 1940, The War Office placed contract 294/c/8512 with Wilkinsons for a total of 1500 Hunting Knives; a deliberately vague description to mask the true purpose of the knife. These knives are what came to be known as the First Pattern design.

The initial batches were largely made by hand until Wilkinsons were able to set up to produce by machine. The first pattern daggers had drop-forged carbon steel blades characterised by a flat Ricasso to the blade which was deep-etched with the “The F-S Fighting Knife” and “Wilkinson Sword”. The handle was best commercial brass and was knurled with a chequered pattern to aid grip. A mild steel s-shaped cross guard and a brass nut completed the knife. The mirror polished blade and nickel plated guard, grip and nut meant that the knife was of a “bright” appearance.
The knife was supplied in a leather scabbard with press-studded retaining loop and a brass chape to keep the wearer protected from the knife tip. Fairbairn himself remarked that in order to achieve a quick draw the sheath must be firmly secured, and as such the sheath was fitted with four tabs to enable it to be stitched to clothing or equipment. Wilkinson Sword is the only company known to have supplied the First Pattern dagger to The War Office.

As wartime demand increased, it was necessary to simplify and speed up production. Furthermore strategically important materials like brass were now in short supply. This meant that crucial changes were made to the knife design. Whilst the handle design remained the same, it was cast with a hollow core meaning that it could be made using less brass. The s-shaped guard was replaced by a simpler flat design and the flat ricasso was removed from the base of the blade, enabling a more straight forward grind which could be done by machine. The scabbard’s press-stud was replaced by an elastic retaining strap. It is important to note that as there was no official specification to cover the knife, many subtle variations from the period can be seen. In September 1942, the bright finish was replaced by the now more familiar blacked knife. The scabbard chape was also blacked to help prevent the metal from reflecting light.

A drawing of the knife and sheath was produced by Wilkinsons in October 1942, presumably to enable the Ministry of Supply to approach other manufacturers as the demand further increased with the war effort. This seems to mark the start of Sheffield’s involvement in the production of the F-S knife. John Clarke & Sons of Mowbray Street, Sheffield are a known recipient of Wilkinson’s drawing and producer of WWII-era second pattern F-S knives. Despite this, also in October 1942, Wilkinson received an order for 38,000 all black finish F-S knives from the Ministry of Supply. Unfortunately there are no surviving records which quantify John Clarke’s F-S knife output.

A full official specification for the knife would not be written until 1946, but manufacture continued at a number of companies, with more changes to the design being made as demand increased yet further, resulting in what is now known as the third pattern. Most manufacturers now favoured a fully machine ground blade such that the central grinding line ran the complete length of the blade. (More recently, the introduction of a small flat “v” shape enabled a better fit where the blade meets the guard). The chequered knurled handle was replaced by one with 27 concentric rings to aid grip, thought to be the idea of Joseph Rodgers of Sheffield. The brass handle material was replaced with a non-strategic alloy. The new handle would have been easier to cast and would have been requiring of little or no remedial work.

The current third pattern design is based on specification E/1323E which was issued on 30 November 1949 and it is covered by NATO Stock Number: 1095 99 963 2037. Specification E/1323E demands that the knife has no markings whatsoever and that it balances at particular point (1 1/32” plus or minus 1/16” from the underside of the cross guard). This balancing point however, was not as many believe, to aid the knife’s flight if used as a throwing knife; rather it is critical to enable it to be tossed from hand to hand without the user taking his eyes off his adversary.

The knife is still in use by British Commandos to this day and has been carried by countless heroes. So important and iconic has the knife become to the regiment that it even proudly appears on the Commando badge. It is inconceivable to think that the Commandos would ever enter a conflict without carrying their trusty F-S knife as their predecessors did in World War II.

THE FAIRBAIRN-SYKES COMMANDO KNIFE AND SHEFFIELD

We have already read how Sheffield’s involvement in the manufacture of the F-S Commando knife began when John Clarke & Sons received a drawing for the second pattern. John Clarke second pattern knives are noted for their particularly good quality. They had acquired another knife producer, William Rodgers, in 1870 and continued to make knives under both names. William Rodgers third patterns are available to order to this day. Joseph Rodgers was also involved in F-S production from at least the third pattern onwards. George Ibberson made F-S knives bearing their world famous Stradivarius Violin trademark which they first registered in 1873. 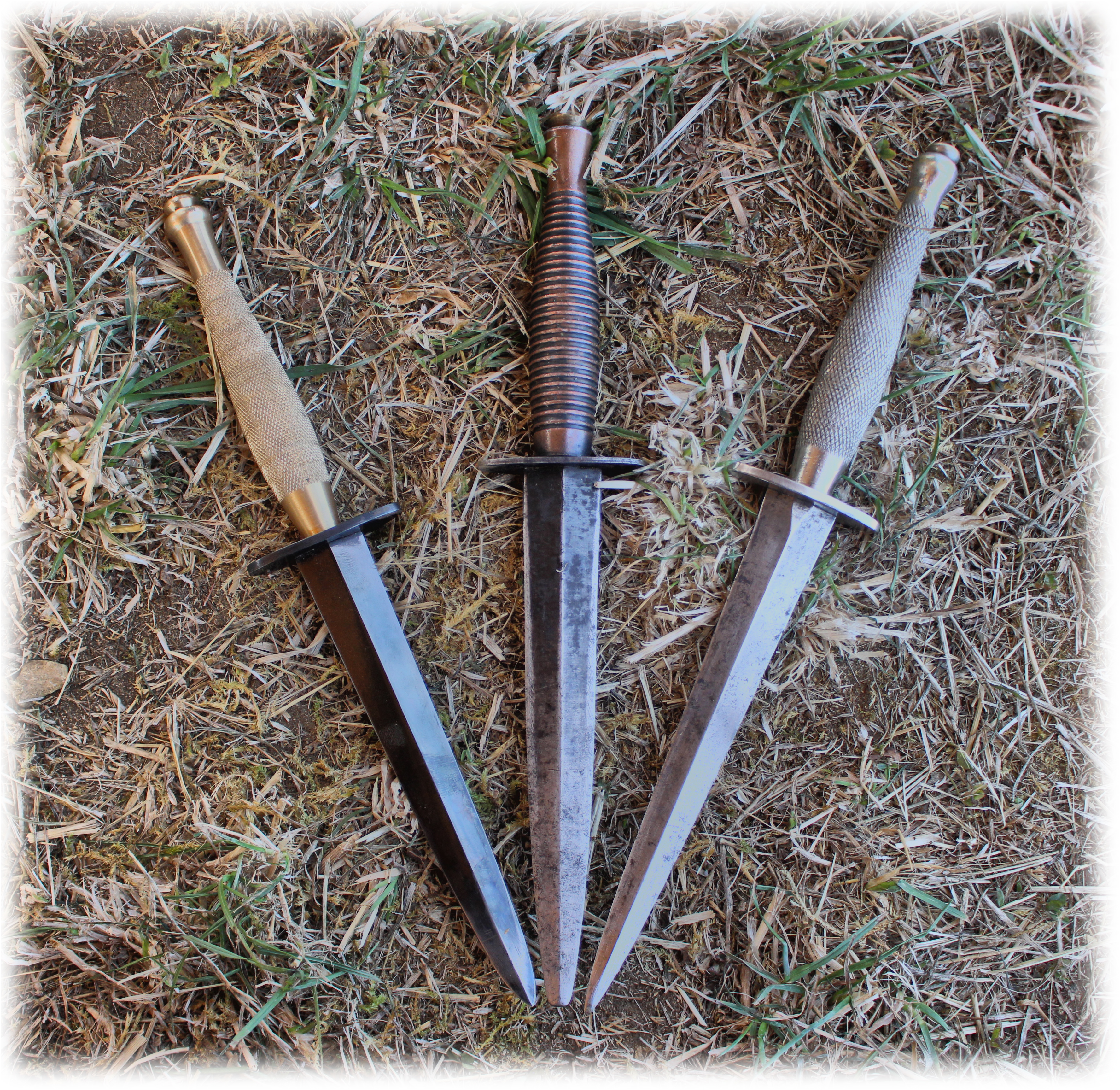